One day last week I hit an impasse while writing. I had just completed a report on health policy for a presentation and found the swing back to fiction a bit bumpy. I had a thought about how a character might handle a thorny situation but was struggling with how to set it up. 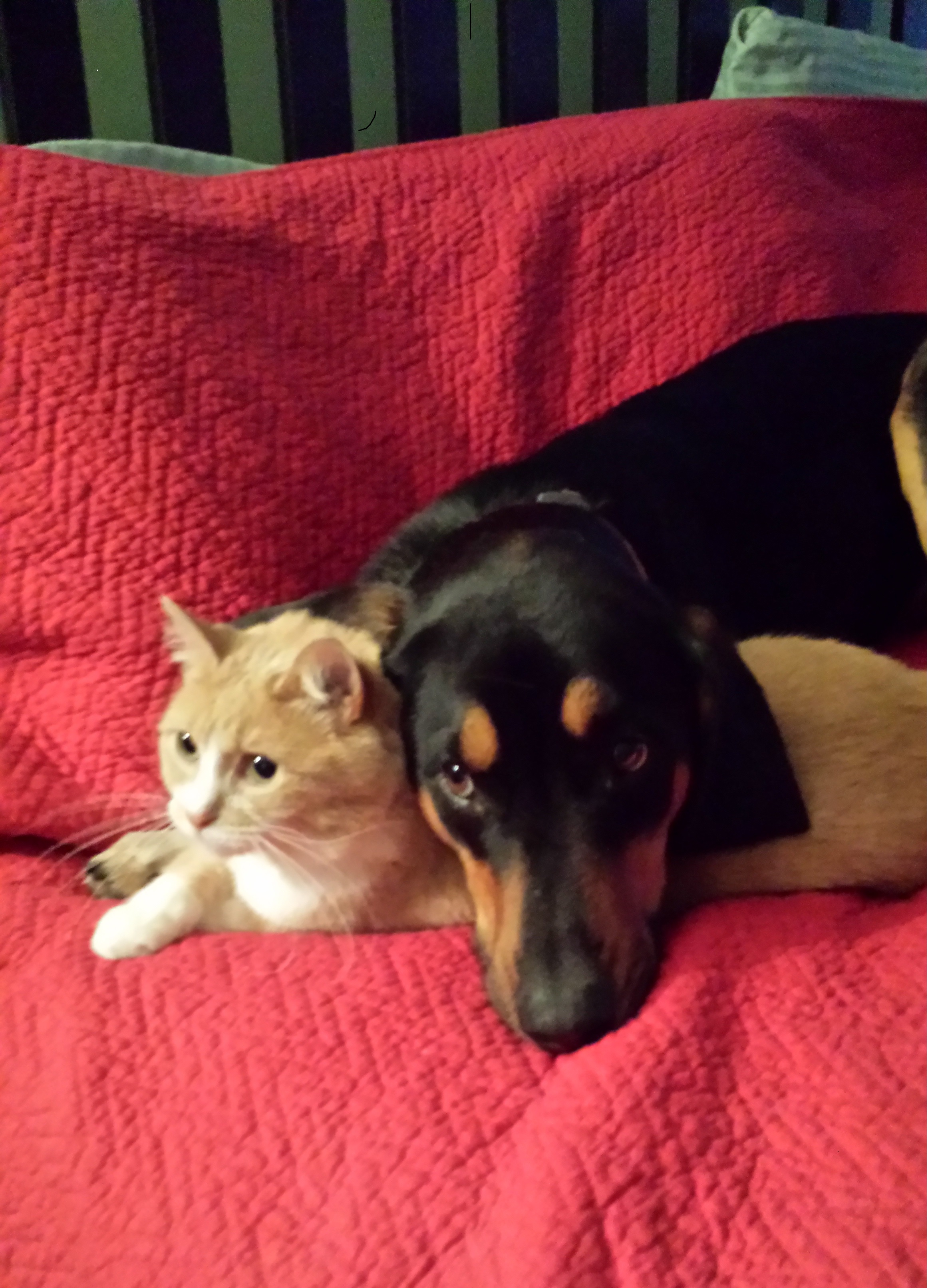 I generally write in my home office, but occasionally, for a change of scenery, I bring my laptop to the kitchen to write there. I passed by Ginny and Dolan, snuggled together on the couch. Dolan is our seven-year-old hound mix and sweet as can be. Our kids found Ginny, our orange cat, in Manhattan in the arms of a couple who had just found her, beaten and left for dead. The couple couldn’t keep her. Ginny had a host of health issues and needed immediate care. Our kids couldn’t say no and today she’s healthy, happy, and playful. Ginny and Dolan are inseparable.

As I sat to write, I couldn’t help but smile watching Dolan and Ginny being so content. My mood lifted; the thought kicked in about how to move ahead with the chapter, and in short order I found a rhythm.

Nelson, our parrot, loves flying from his perch to the kitchen counter, hoping to find a treat. Just as he flew over to where I was writing, my phone rang. It was a call I had been waiting for and had to take it even though I had just gotten into a groove with the chapter.

As I was talking, I absentmindedly stood up and wandered into the next room. I heard some faint tapping noises coming from the kitchen, but it didn’t really register.

My call was short, about five minutes, and I headed back into the kitchen only to discover what the tapping was all about. It seems Nelson had created a new perch for himself – my laptop keyboard. Briefly entertained, I watched him for a few seconds as he happily danced around. I had the momentary fantasy that we might have the avian equivalent of the proverbial monkey typing out Hamlet. He would produce a beautifully authored exchange between two characters, filled with wrenching emotionalism while deftly moving the story along with Shakespearean elegance.

Caught up in the daydream about Nelson, I worried about how I could possibly explain this superior piece of writing to

a publisher unaccustomed to such brilliance coming from me, such mastery of language. And what about Nelson, his ego soaring to new heights with his newly discovered literary craftsmanship? I might have been laying egg after egg with this chapter, but Nelson, far from winging it, was many steps ahead, flying through the chapter with turns of phrase rivaling anything in To Kill a Mockingbird or Jonathan Livingston Seagull.

I walked over to Nelson, who was still happily tap-dancing on the keyboard. Coming out of that brief reverie, I noticed that he wasn’t roaming the keyboard. Instead, he was focused on one small area in the upper right-hand corner. He was zeroed in on -- you guessed it -- the Delete key! Nelson had managed to delete about four paragraphs of my work. He hadn’t been adding to my story. He had been erasing it!

I wondered if Nelson is really so prescient that he understood the work was well beyond repair that, to save me from humiliation, he charitably removed all evidence.

The next time I work in the kitchen, I’ll put some extra treats on the counter and remember to close my laptop before stepping away. But I’ll also leave a notepad and pen for him.  Who knows, maybe he’ll grace us with a reimagined King Lear.