Two months ago, I closed the door behind me as I exited my home office. I had been holed up in there with our dogs as work was happening in the kitchen. Walking the few feet toward the stairs, I was suddenly startled as our hound-mix, Dolan, brushed past me. Apparently, I hadn’t been as careful as I thought when closing the door.  In an effort to catch him, I pivoted, losing my balance. I twisted around trying to right myself by awkwardly – and futilely – grabbing for the cat tree in the hallway (we have a cat and two dogs, and yes, they all get along). I fell backwards, luckily landing just before the top step. A sharp, shooting pain in my shoulder overtook any surprise I felt. I spent a few seconds trying to convince myself it was nothing serious, but the impulse to deny was no match for the throbbing pain.

It didn’t take much convincing for me to agree to go to the urgent care clinic near our house. An X-ray showed no breaks, and the Physician Assistant concluded it must be a sprain. Ice it and take some extra strength Tylenol, the PA instructed, and you’ll feel better in a couple of days. He gave me a sling and said to wear it if I thought it would help.

I’ve worked in healthcare management my entire adult life, and for the past several years I have also been teaching doctors, nurses, allied health professionals, and hospital administrators in a graduate program at SUNY. I am acutely aware of the challenges they all face – many were my challenges, too. As a patient, though, on the other side of the equation, my view was dramatically different. This time, I was the one feeling vulnerable, I was the one hearing only every other word the doctors said, their words clouded by my apprehension. I was the one who could be, to them, just another patient of many that day, any day.

The pain over the next twelve hours was severe. Even the weight of the ice pack on my shoulder was too uncomfortable. In the morning, I called Princeton Orthopaedics where I’d had a good surgical experience for another injury several years ago. I was told to come right over. As soon as I finished signing in, I was escorted into an exam room. The PA, a very affable clinician whom I had met during my earlier surgery, came in and asked me to move my arm in a variety of ways, quickly surmising that it was probably a tear in my rotator cuff. He ordered an MRI to determine how extensive the tear was. In the meantime, more ice, wear the sling, Tylenol for pain.

A tear? My rotator cuff? Potentially extensive? I know he went on for a while, but I heard little of it. Fortunately, I was not alone, and Amy absorbed all the information. The MRI was scheduled for the following week, and a couple of days after that we got the results. The PA was correct, the MRI confirmed a significant tear, and it was suggested I see a surgeon as soon as possible. They recommended Dr. R and I made an appointment for his next available opening.

I thought it prudent to get a second opinion, so I also made an appointment with a highly regarded surgeon (I’ll call Dr. X) in a world-renowned medical center in New York City. I was able to see him sooner than Dr. R. I was secretly hoping that at least one of the two would say there was a great alternative to surgery. Okay, so it was not such a secret hope – I was pretty vocal about that wish.

At the NYC medical center, a pleasant PA manipulated my arm and asked the now routine-to-me questions about my ability to use it.

The PA completed his exam, and as he left he said the doctor would be in shortly. In a few minutes, the door opened and Dr. X entered the room. And by entered the room, I mean he stood in the doorway, the door still slightly ajar, and with one hand on the doorknob, he said, “You definitely need surgery. No other option.” He had reviewed the MRI report and had seen the X-ray, he told me, and alterative solutions were not viable in my case.

Dr. X performed the identical exam as the PA, then curtly reiterated, “Surgery.” As he turned to leave, he casually added that if the biceps tendon was damaged he would “simply cut it.” It would shrivel, he informed us, and eventually settle as a “Popeye” lump on my upper arm, but that was normal, an expected result. But not to worry, he said, other than the deformed appearance, there is no serious side effect since the remaining upper tendon would do the work.

I was stunned, Amy was livid, and he was in the hall before sticking his head back in to say that the “girl” in the office would be in touch to set up the surgery.

Dr. X was in too much of a hurry to spend any more time than he deemed necessary. He never asked how I was feeling, never asked if I had any questions, never addressed follow-up care or physical therapy, and he certainly never noticed my anxiety and apprehension. He never even asked how the injury occurred.

As Amy and I left the exam room, we spotted him down the hallway at a nurses’ station eating birthday cake. He was laughing and playfully swatting at a buoyant balloon bouquet. I felt deflated.

This was not the experience I had expected from this “highly regarded” surgeon. It wasn’t just that he quashed my hope for an alternative to surgery, it was that he quashed the hope I did not even realize I had, for an empathic interaction in which my questions would be addressed and fears allayed.

His conduct was fraught with disrespect. Disrespect for me, for Amy (he barely acknowledged her presence), for the “girl” in the office, and for the process of building a relationship with a patient. And even if he was the most highly regarded surgeon on the East Coast, I did not want him to touch me, let alone perform surgery.

I had done my due diligence and researched Dr. R’s credentials and was comforted by learning that his training and experience were on par with, and even surpassed, that of many of the surgeons at the NYC facility. But because of the negative experience with Dr. X, especially his plan for the damaged tendon, my apprehension for seeing Dr. R was heightened. On the hopeful side, the experience couldn’t be worse.

Back at Princeton Orthopaedics, once again I was on a table in an exam room, arm in sling, armed with questions, and this time armored in a protective shell of negative anticipation. Dr. R greeted Amy and me and we could feel his smile even though we were all masked. 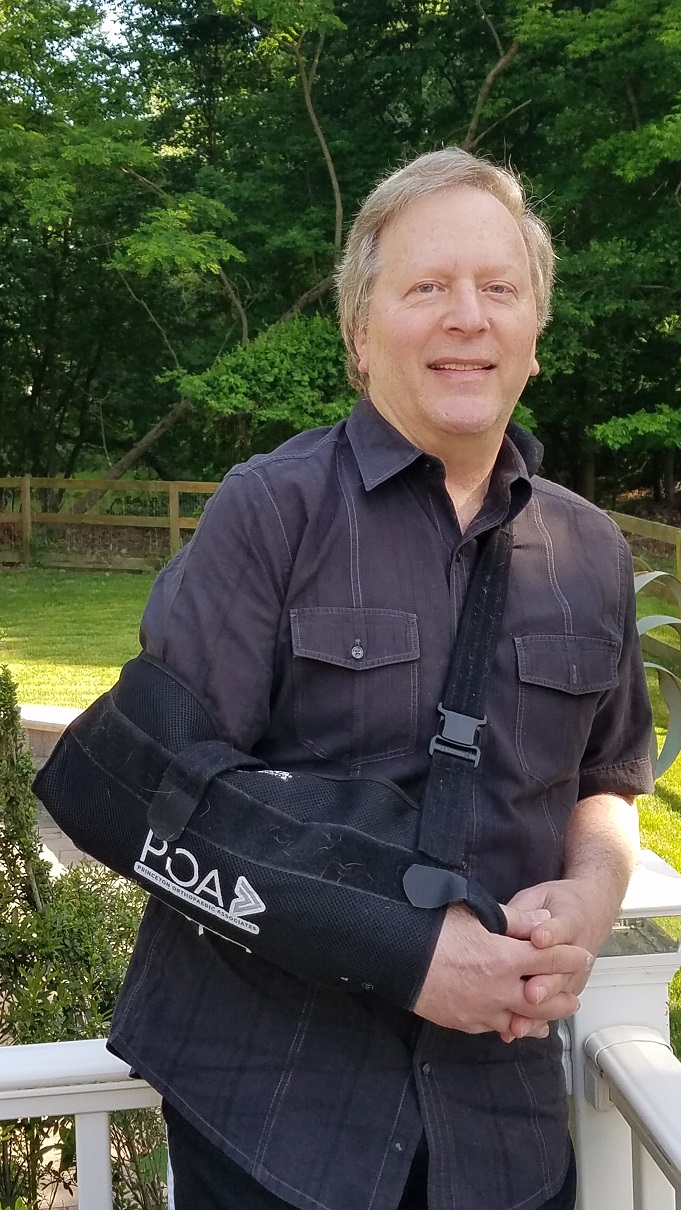 “Tell me what happened” Dr. R began, genuinely wanting to understand how the injury occurred. He closed the door behind him and sat down in a chair facing both of us. I was instantly at ease, my protective armor slipping away. He asked if it would be okay for him to do a physical exam of my arm. He asked. Obviously, this was the point of my being there, but he asked.

After the exam, Dr. R again sat down as he explained why the tear could be repaired only with surgery, that it was too deep to heal on its own or with physical therapy. He acknowledged this was probably not what we had hoped to hear but assured us that it was the best option, especially since I was still, as he put it, young and active.

Amy and I felt he would give us all the time in the world, inviting us to ask any and all questions. And we had many. We asked about the procedure, aftercare, rehab, stages of recovery. Every question was answered thoroughly with time for us to digest the information.

Tentatively, I asked about the possibility of a damaged tendon. Aware of Dr. X’s position, I was not looking forward to hearing how Dr. R would address this matter. If it was damaged, would he leave it severed? I asked.

Once again, I relaxed in his presence. He explained that the conditions under which he would do that are limited and when there was no alternative, for example, with an elderly patient whose tissue might not hold securely if reattached. For someone “active, fit, and young like you,” he would reposition it so as to preserve mobility and strength. In fact, he expressed confidence that my capabilities would be fully restored. But could I play the piano? I lamely joked. He undoubtedly has heard that a thousand times, but he laughed. He wasn’t being polite or patronizing – just being human. One human to another. And the fact that he referred to me as “young” made me realize that he viewed age as more than just a chronological marker, but as a state of mind and overall health.

I trusted him and felt that I was in excellent hands (and for surgery, what could be more important!).  I was comfortable expressing my apprehensions and never felt that I was occupying too much time or space. As nervous as I was about the surgery, I now actually began looking forward to it as the first step toward a full recovery.

Dr. R advised that for best outcome surgery should be performed within two months from the date of injury. Given that, he asked if I’d like Nancy, his scheduling assistant, to call within a few days to schedule surgery or if I would prefer to call her if and when I was ready. Grateful, I asked if Nancy could call.

Amy and I and Dr. R said our good-byes, but as Dr. R reached for the door, I realized I had another question. He turned and sat back down. It was his way of letting me know that my concerns matter.

I am now three weeks post-surgery. All went as I’d hoped – the tear, which was quite significant, was repaired, and the tendon, indeed damaged, was “cleaned-up” and reattached. I wear a bulkier, more supportive sling, removing it three times a day for relief and minimal exercise of my lower arm. I sleep in a reclining chair at night. In a few weeks, I graduate from sling to physical therapy and look forward to four to six months of continued healing, at which point I should be able to resume all activity.

I can’t help but reflect on the contrast between my experiences with the two physicians. With one, I felt viewed as a collection of symptoms. With the other, I felt seen as a whole person, but with an injury. And the exam room door is the symbolic heart of this difference. For one physician, it was a way out.  For the other, it was a way in. How each behaved in that fraction of a second with the doorknob will always be a powerful firsthand reminder that for patients it is the most seemingly inconsequential of gestures that have the most visceral and lasting impact.