This past summer, I flew to Atlanta for a consulting project at a hospital. I hopped in a cab at the airport and headed directly to the hospital. As the driver entered the hospital’s long circular driveway, I gathered the documents I had been reviewing and put them back in my briefcase. The hospital, a tall, gleaming building, had recently gone through a makeover. I admired the flower beds adorning the walkway with a vibrant display of lavender and pink, bringing life to a building associated with illness.

As I got out of the cab, I noticed that the woman exiting the cab in front of mine seemed to be struggling. A second later, I saw why – she was pulling crutches from the back seat. I walked over as she was regaining her stability and offered to help.

“Oh, thanks,” she said, “I’m here for tests. It would be great if you could get someone to bring me a wheelchair.”

“Of course,” I replied. “Would you like some help getting onto the curb first?”

She nodded and thanked me, “I’m Anne. I really appreciate your help.”

What happened next is, well, you can’t make this stuff up.

Anne evidently didn’t have much experience with crutches. Seeing no benches around, I helped her to lean against a wall adjacent to the large revolving door at the hospital’s entrance. The door was big enough to accommodate at least four people and a wheelchair.

About fifteen feet away, just at the edge of the curb, a security guard stood, looking intently at his clipboard.

“Excuse me. Sir,” I said, getting his attention, then gesturing toward Anne, “She needs a wheelchair. Can you please arrange for someone to help her?”

He looked up and cursorily glanced around. “There’s usually a patient escort here,” he said. “Must be on his break.”

“Okay, well is there someone else who can help?” 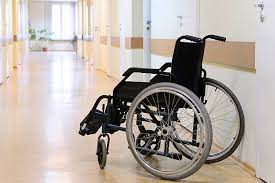 “It’s not really my job,” he replied. “Try the Information Desk,” he said, tilting his head toward the lobby. Then he shifted his attention back to his clipboard.

Could this really be? Could it be that whatever he was looking at on the clipboard was more important than this woman who needed help?

I looked back at Anne. She appeared fatigued as she leaned against the wall, her arms resting on the top of the crutches for balance.  I motioned to her to wait a moment while I went inside to see about a wheelchair. She smiled back appreciatively.

The lobby was large and bustling. So many people were moving about, employees in scrubs and lab coats, patients heading to their appointments. An escalator was centrally located, leading to an open mezzanine with a large waiting area and some food kiosks.

The Information Desk was about 25 feet across the lobby from the revolving door. It was staffed by a man and woman, each wearing blue blazers with the name of the hospital emblazoned on the breast pocket. I explained to the woman, who was free, that I was helping a patient who had arrived for tests. “She’s waiting outside, and she needs a wheelchair. I’d be grateful if you could you help her.”

“Did you check with the patient escort?” she asked.

“No, the security guard told me he’s on a break,” I replied.

“What about the guard, can’t he get you a chair?”

“He said I should ask you.”

An exasperated look crossed her face. Pursing her lips, she said, "They shouldn’t say that because it’s not our job. It really is theirs. You know, because it’s an outside thing and we take care of things once people are inside. “

I waited for a second, anticipating that she would say something else, something helpful, something showing an interest in the patient’s need as opposed punting responsibility. But that was it. She had delivered her message that she could not – or rather, would not – help.  Discussion over.

Wasn’t this a hospital, or was I losing touch with reality? Doesn’t this place exist to take care of people? This was exasperating.

I looked across the lobby and noticed a wheelchair against the far wall. I asked the woman at the Information Desk if I could take it.

“Oh, that wouldn’t be up to me. You’ll have to check with the security guard.”

As I pivoted in the direction of the wheelchair, I turned and said, “But the chair is inside, so I would think it falls under your jurisdiction.”

I quickly strode to the chair, and overriding their inside/outside rules I made the executive decision to commandeer it and proceeded to wheel it through the revolving door.

Passing the guard, who was still engrossed in his clipboard, I mentioned that I took the wheelchair.

He looked up. “Did the Information Desk say it was ok?” It was telling that he did not ask if the people said it was okay, but if the Desk did!

“They said I should ask you,” I called back over my shoulder as I continued toward Anne.

He shrugged. “I hate when they tell people that. They know it’s not my job,” he grumbled under his breath.

After assisting Anne to settle into the wheelchair, we entered the revolving door and headed toward the patient registration area. The representative checked her in, advising that someone from the Imaging Department would be down to get her in about fifteen minutes. I helped her to the seating area. She thanked me and said she could take it from there. I then returned the wheelchair to the spot where I found it.

Briefcase in hand, I walked to the nearby elevator bank, looking back and relieved to see that Anne seemed more relaxed. The executive suite was on the 19th floor, the top floor in the building. One elevator was designated as “19th Floor Only.” A security guard was stationed directly outside the elevator, checking credentials of anyone seeking to go to that floor.

While in the elevator, I was trying to sort out what had just occurred. Was it just a case of two random employees with a seemingly identical lack of desire to help patients entering the hospital? In other words, to do their jobs. Did the hospital simply hire the wrong people for roles that had such a public presence? Were both employees feeling so burdened that it was necessary to offload responsibility onto the other?

I was reminded of a story: In 1961, President John Kennedy made a visit to the NASA space center. As the story goes, as he was getting a tour in the evening, he noticed a janitor and walked over to him.

“I’m Jack Kennedy,” the president said, introducing himself. The janitor introduced himself and they shook hands.

The president then asked about his job.

“My job is to help put a man on the moon,” the janitor replied.

We reached the 19th floor. The elevator door opened, and I stepped out onto plush burgundy carpet. A few feet in front of me was a reception desk made of richly lacquered wood. A grouping of posh, velvet Chesterfield roll arm sofas and chairs welcomed guests to wait comfortably.

Seated behind the reception desk, a young man greeted me warmly. “So nice to see you, Dr. Eisenberg. The executive team is ready for you in the board room. I’ll walk you in.”

Hmm, I thought, I get the benefit of an escort, but it is somehow acceptable to leave a patient leaning against a wall outside the building. A sharp contrast to what I saw nineteen floors below! My hypocrisy antennae shot up.

We walked down a lengthy corridor. Posters and photos adorned the wall. One poster, a graphic, featured a patient in the middle of a circle and surrounded by healthcare employees, each with a caring look riveted on the patient. The hospital’s name and logo were spread across a banner at the top of the poster. And just below the circle enveloping the patient, in a bold 3D font just to be sure there was no mistaking the emphasis, were the words, “Fiercely Patient-Centered.”

There were several photos of smiling employees, obviously staged, going about their business – placing a meal tray in front of a patient, positioning a patient for an x-ray. One in particular caught my eye – it was a smiling security guard pushing a happy patient in a wheelchair.

How did this disconnect come to be? It was only 19 floors below that I witnessed a patient enduring an indignity. (Well, to be truthful, I spared Anne the sordid details about the guard and information desk representative. I didn’t want her to have any doubts that she had come to the right place.) But up in the executive suite, a different world was on full display -- a fantasyland promoting the illusion that the more employees went the extra mile for patients, the more joy they would experience, the more enriched and rewarded they would feel.

I’ve had the good fortune to work with hospitals where that does occur. But it doesn’t happen automatically. And it doesn’t come about simply because those hospitals managed to hire an entire organization full of people with caring dispositions. If the message that everyone is part of the same team, working toward the same goals, is communicated, reinforced, and modeled from the top down, that disconnect would likely not exist.

Employees would feel more like the NASA janitor, proudly connected to the whole.

It takes a lot of time and effort to make sure employees feel that way. When they don’t, a culture of indifference can settle in. Employees may become embittered. They may not be motivated to do more than the bare minimum, no more than what is required. Cracks in the system emerge. And who falls through the cracks? In a hospital, it’s patients like Anne, having to rely on a stranger to round up a wheelchair.

The receptionist opened the door to the board room. It was beautifully appointed.  Stretching from one end to the other was a mahogany conference table, the midmorning sun creating shimmering prisms along its reddish sheen as it swept through a crystal vase of white roses.

Seated around me at the table were nine people, including the CEO, the CFO, and the COO. We were there to discuss the acquisition of a large, multispecialty medical group that was geographically distributed across multiple communities.

After some pleasantries, the CEO said that he hoped I hadn’t been overwhelmed by the large amount of material he sent for me to review. He explained that he wanted to be sure I had a good understanding of the hospital’s performance and plans. There were myriad reports on the hospital’s finances, plans for expansion, patient volumes across a range of diagnoses and procedures, referral patterns, and plans for additional acquisitions.

“Thank you so much for preparing such a comprehensive portfolio. And, yes, it was very informative.” I replied. “But it doesn’t compare to what I learned about your hospital today, after just five minutes in the lobby.”