Shooting straight from the hip

My friend, Sam, was recently hospitalized for hip surgery. The day after he was discharged, I called to see how he was feeling. He was relieved that it was over as the surgery was a long time in coming. Just after recovery, the surgeon told him that the procedure was straightforward and there were no complications. However, Sam told me that he was troubled by a comment made by a surgical resident the morning following surgery, shortly before he was to be discharged.

After Sam mentioned to him that he had some pain, the resident curtly countered, “Well, that’s impossible. You’re on enough meds to keep you pain-free for days.”

The resident’s remark – doubting the very real pain he was experiencing – caught Sam off guard. And hearing that he should not be feeling pain, Sam worried that something was wrong. But when the nurse came in a few minutes later with the discharge order, Sam kept his concerns to himself.

Have you ever had a similar experience, feeling confused about the information you were given or that a concern was not taken seriously?

If you have, you’re not alone. Patient satisfaction surveys speak volumes about this very issue. To give some context, Medicare assigns ratings of one through five stars to hospitals based, in part, on the results of patient surveys, one star for hospitals that receive a preponderance of low ratings, five for those consistently receiving very high ratings. Of course, hospitals hope for and strive to reach five-star ratings overall. However, in a recent survey of over 3,000 hospitals across the country, almost half as many hospitals received a one-star rating as received a five! And far more hospitals received two stars than five! 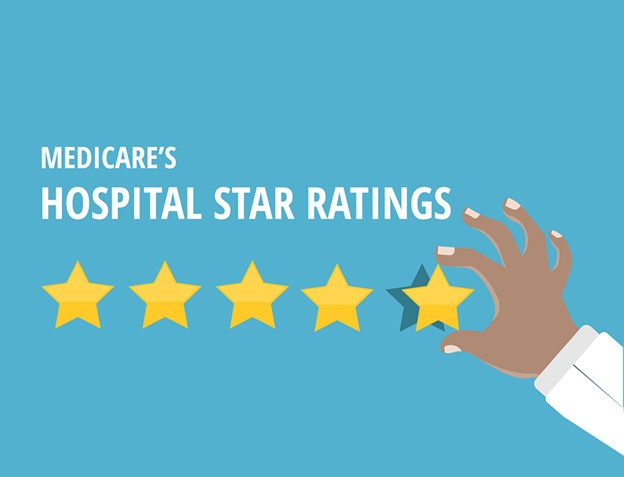 Why is this the case? Survey analysts offer many insights into how people make judgments when they fill them out. And this is a main finding: it comes down to communication and whether patients felt the hospital staff cared about them.

A good way to illustrate how something seemingly unrelated to communication is judged on just that involves the food that hospital patients are served. It would seem logical that food could be evaluated on taste, temperature, health value, and presentation. So, the food may be rated highly while communication from staff is rated as poor, assuming that’s how the patient saw it.

Or, at least, that would seem to be the case. But a closer look reveals something different.

In actuality, patients judge the quality of the food, at least in part, on whether they liked the person who served it to them. If they felt the server was personable, kind, and cared about them, they tended to be more lenient when rating the quality of food, even if they didn’t like it.

Why? In focus groups, patients reported that they didn’t want to rate the food negatively because it might reflect poorly on the “nice person” who brought it to them. It works the other way around as well. If the server was thought of as unpleasant or uncaring, even delicious, healthy food will be rated less favorably than it was actually perceived by the patient.

Before getting back to Sam, I’d like to offer one more tidbit about the importance of communication, this one as it relates to waiting times, a major source of patient complaints.

Take two unrelated patients, Jeremy and Phil, who went into different emergency departments at the same time and on the same day for possible strep throat. After registering, each waited ten minutes to be brought into their respective exam rooms. The nurses took their vitals and explained to each that a doctor would be in shortly.

Another ten minutes elapsed and at that point things began to differ. An emergency room aide entered Jeremy’s room saying he was sorry about the wait, but the doctor was tied up with a difficult case and would be in as soon as possible.

No one went into Phil’s room.

Ten more minutes went by. The same aide returned to Jeremy, apologized again for the delay, and reported that the doctor needed a bit more time. The aide asked Jeremy if he would like some water or a blanket while he waited. Jeremy declined, but thanked the aide for stopping by with the update.

No one ever checked in on Phil. Frustrated, he decided that in another few minutes he would venture into the hall to check on the status of the doctor.

The day after their visits, each received a survey about their satisfaction with the emergency department experience. Jeremy gave a rating of 4 out of 5. In the comments section, he wrote, “Waited an hour to see the doctor. But the staff were great, kept me apprised of everything.”

Phil, who waited half the time, gave a rating of 2, and wrote in the comment section, “Waited forever to see the doctor. Unacceptable!”

This is not at all unusual – there’s a ton of research that shows that when patients are kept informed about waiting times, they are far more forgiving about delays.

Now back to Sam and his post-op pain. Sure, he could have – and should have – insisted to the resident and the discharge nurse that he was experiencing pain and that he was concerned that something was amiss. Most of us believe that if we were in Sam’s place, we would have been more assertive. But the truth is that so many are not. I’m reminded of the time I overheard an elderly couple as they passed my office when leaving the hospital. The wife was admonishing her husband for not disclosing the true severity of his backache. His response: "I didn't want the doctor to think I'm a complainer."

Not being honest or completely forthcoming during medical exams is a big issue. All sorts of reasons account for it: health literacy issues that make it difficult to understand care directives, anxiety associated with the medical visit as well as the possibility of receiving bad news, embarrassment that the illness may have resulted from poor lifestyle habits, apprehension about challenging authority, and like the husband I overheard, the desire to be an ideal patient.

The consequences could be serious. It means that the doctor will make decisions that do not take all the relevant information into account.

By speaking up, Sam could have instantly been reassured that the surgery did, indeed, go as well as he had hoped and reminded that people have different responses to pain and pain medications. Perhaps the resident might have prescribed a pain management program to help with healing and rehabilitation or, at the very least, conferred with a colleague who had more experience.

Additionally, by voicing his concerns, Sam could have created a learning experience for the resident, altering the resident’s misguided belief that in denying Sam’s pain he did the right thing for him. This new awareness would serve future patients well, making it that much more likely that they would be heard and treated with greater sensitivity. It is not only doctors who bear responsibility for communicating effectively; patients also have the right and responsibility to be forthcoming and advocate for their own health and healthcare experience.

Once reassured that all was well, Sam felt more able to manage the pain, which did ultimately surrender to the pain medication. By the time he went back to the surgeon for his follow up appointment, there was no more pain, and he was enjoying greater mobility with his repaired hip.

He decided to tell the surgeon about the unsettling conversation with the resident. The surgeon was sympathetic and said that it happens more often than she’d like. She assured Sam that she would speak with the resident and help him understand the consequences of his unwarranted attempt to allay Sam’s worry.

The surgeon thanked Sam for speaking up and told him that he did a favor to both her and the residents’ future patients.

Is every case of miscommunication as easily rectified? Of course not. But, without the openness on the part of the patient, doctors may inadvertently miss cues and, thus, opportunities to ensure their patients’ comfort and comprehension.