The angst of secrecy

Primal Calling is about a young man named Jack Davies, who discovers his never-before-seen birth certificate and, on it, the name of the father he never even knew he had. His life is thrown into a tailspin. Jack embarks on a secret search to find him, fearful of telling his Mom out of concern that she might try to stop him. Along the way, he learns the stories of others with similar life predicaments, people engaged in all-consuming pursuits to find a lost loved one or a parent or child they never knew existed. I’m often asked if the anecdotes in the book are fictional. The answer is yes. Well, mostly. One of the more astonishing stories that Jack comes across is true and is based on distant relatives of mine.

My maternal grandparents came to the United States from Austria just after World War I, desperate to escape the persecution of Jewish people that had been gathering momentum in Europe. Incidentally, my grandfather was conscripted into the Austrian army and was deployed during the war.

My grandmother had four brothers. All were fortunate to get to the U.S. safely. One brother, whom I’ll call Ben, worked for a company that managed luncheonettes in New York City. In the early 1940s, he and his wife, whom I’ll call Helen, adopted two children.

Back then, adoption proceedings were cloaked in far more secrecy than they are today. It wasn’t unusual for an unmarried woman who became pregnant to have been urged – more typically pressured – to give up her baby for adoption so as not to endure what at the time were the shame and stigma associated with “illegitimacy.” As described by Lisa Munro: “Surrendering a child erased all evidence of an unwed mother’s sin and sexuality, but required secrecy to facilitate the charade of unsullied female purity and family honor … Adoption agencies often promised mothers that no one would ever find about their greatest shame. Many mothers never revealed the existence of their surrendered children to anyone, never speaking of them again.” 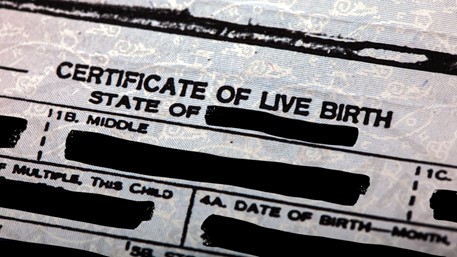 Thus, back when Ben and Helen adopted their children, and continuing for decades more, birth and adoption records were often sealed, rendering it difficult, if not impossible, for adopted children to discover the identity of their birth mothers. While many adoptive parents told their children that they were adopted, many did not. At that time, adoption agencies made efforts to place babies with parents who bore some resemblance to reduce the likelihood that the child or the parents would draw looks of suspicion.

One evening – and this goes back over fifty years ago – Ben and Helen settled in after dinner, tuning into a local news show on TV. What happened next is described by Jack toward the end of Primal Calling, when Jack is asked to recount what he learned about a family in Wisconsin (just an aside, this is not where my relatives actually lived). To avoid spoiling the book for anyone who hasn’t yet read it, I’ll omit some details, like with whom Jack is speaking and why he is reluctant to share the story.

Jack began grudgingly, “Just a couple of nights ago I was reading about this case in Wisconsin. A husband and wife were watching the local news on TV. A story came on that involved this young woman, I think in her early thirties, who was looking for her birth parents. Turns out she was the founder and president of a small local organization that helps adopted people find their birth parents. The woman, get this, is the adopted daughter of the husband and wife who were watching the news. They never even told her she was adopted. She never told them she knew, let alone that she runs an organization that helps people in her situation.”

Jack was becoming more animated and energized as he described the story. “There was a big blow-up in the family. The adoptive parents confronted her the next day. She told them she loves them and was grateful to them for raising her. She said she had a feeling she was adopted, mostly because she looked different from them. She explained that she did some research and confirmed her suspicion. Then she was able to get the name of the adoption agency and was petitioning the courts to allow the records to be unsealed.”

“The adoptive parents hired a lawyer to make sure the court doesn’t permit it.”

“In this case, the court will probably appoint a mediator,” Jack explained. “Court rulings almost always rule in favor of what they regard as the best interests of the child. That makes sense. But here you have a thirty-year-old woman who doesn’t require legal protection. So, it comes down to this frustrating clash of what everyone thinks is the right thing to do. Everyone kind of sees each other as being at war, which seems so selfish. And then the legal process can make this worse because the lawyers want their clients to see the other side as the enemy. The kids are usually left in the middle, which obviously sucks.”

I never got to know Ben and Helen very well. My recollections of them are more fleeting than well-developed. Ben had a round and jolly look. He wasn’t necessarily boisterous, but his voice had a distinctive joyfulness to it. He called the men and boys around him “Sonny,” which felt genuine and endearing, his way of accelerating the closeness that all would inevitably feel toward him. Helen had a particular grace to her. Where Ben projected himself into the room, Helen was more reserved. Ben shrunk the distance between himself and those in his presence; Helen maintained it.

Of course, I would never know what was inside their minds or hearts about the adoption or about the discovery of their daughter’s private, and then very public, pursuit. Ben and Helen had spent a lifetime constructing a reality, careful to maintain the secret that underlie it. Were they always on guard for the possibility that one of the children would ask the dreaded question they worked so hard to avoid? Did Ben and Helen take comfort that they were loving, generous parents? Or might that have been obscured by the anxiety that the skeleton might poke its way out of the closet and into some conversation, somewhere, anywhere? Could they maintain the charade? Did they have a contingency plan if they could not?

And their children, well, at least their daughter, was driven – more to the point, tormented – by the need to discover the truth about her life circumstances. Unquestionably, it was always on her mind, shaping her identity, how she interacted with the world. Could she give herself fully and honestly to a relationship with a significant other? Would she ever unconditionally trust an intimate partner? Would she ever have children? What could she tell them about their grandparents?

As for Ben and Helen, they may never have had even an inkling that their daughter knew that she was adopted until that fateful evening when they turned on the local news.

In Primal Calling, Jack is filled with far more questions about his father than answers. The mystery of his father’s identity is always with him, gnawing at his psyche. He can’t rest until he gains an understanding, some understanding, of who his father is. I came to know Jack and give him voice from the countless stories I read about people just like him, resolutely devoted to a search for a loved one that no obstacle can deter.

I only knew Ben and Helen when I was a child. I don’t believe I saw them or their children after their daughter’s initiative became public. I had heard about the contentious aftermath from my grandmother. After my grandmother died, my parents lost what little contact they had with them.  I never learned how things transpired.

What I do know from my grandmother and mother is that Ben and Helen were caring people and devoted parents. I don’t know how to square that with their effort to keep the adoption records secret. Making a judgment today about their actions seems more straightforward than if I try to put myself in their shoes, especially in so different a time, when cultural and social mores put an emphasis on privacy and secrecy.  And my purpose today is not to judge, but to give a glimpse into how those old adoption protocols could lead to such anguish.

All involved – Ben, Helen, their children, the birth mothers – had the misfortune of coming into one another’s’ lives when a truth so existentially fundamental to who you are was required to be buried. And then, perhaps, Ben and Helen and the birth mothers felt ensnared in a worry that it might surface. How tragic to have to live that way.

Yet, with all this, Ben and Helen opened their hearts and home and gave a lifetime of love to two people. I hope that however those children resolved the mysteries of their birth, or failed to resolve them, that love eventually provided some sense of peace in their lives.