I was recently on a panel discussing the direction of health policy. At the Q and A following our presentations, a member of the audience asked each of us to share a personal experience that had influenced our views on health policy. I instantly recalled a late-night encounter I had quite some time ago with a young woman in the emergency room of the hospital where I worked. Her story has stayed with me as it touched me deeply at the time and did much to crystallize my thinking about how our health care system is broken.

Many years ago, as a member of the hospital administrative team, I made routine visits to staff who worked the night and weekend shifts. On one of those visits, at about 2:00 AM, I stopped in to visit with some of those employees to give updates about the hospital.

A bit later, still in the wee hours of that morning, I walked over to the emergency room. On that Tuesday, the emergency room was quiet. In fact, there was only one patient in the waiting room, a young woman. And waiting with her were two very young girls I assumed were her daughters. The younger one was about two years old and was sitting on the woman’s lap, while the other, about four, was sitting in the adjacent chair. 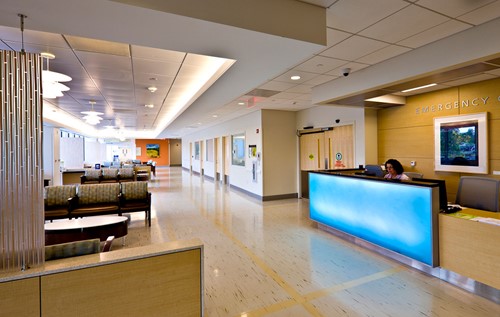 As I walked over to the young woman, she coughed into the frayed remnant of a tissue. The closer I got, the younger she looked. I guessed she was 24 or 25. She was wearing sweatpants and a light purple jacket. A heavy scarf was loosely draped around her shoulders. Her eyes were watery and red, and her lower lids were puffy.

Both girls, awake and quite well-behaved, were wearing pajamas. Their jackets were on the seat on the other side of the young woman, along with a Minnie Mouse backpack from which a child’s sippy cup and small blanket were poking out the top.

I introduced myself and she said her name was Alicia (not her real name to protect her privacy). When I asked if she had been seen yet, Alicia nodded, mentioning that she had registered with the receptionist and was waiting to be called in to see the doctor. I asked the names of the girls, whom she confirmed were indeed her daughters. The older girl’s name was Maya and the younger one’s was Jayla, which Alicia said means “winner.” It was the only time I saw Alicia smile.

Throughout our brief conversation, Alicia coughed. It was raspy and unrelenting. At one point, Jayla covered her ears with her hands as she looked up at her mother.

Alicia apologized for coughing and told me that it had started about a month ago and had gotten much worse over the past couple of days. That night, around midnight, she awoke from a horrible bout of coughing. It was so jolting that she became dizzy and began to shake. She panicked and believed she had no choice but to come to the hospital. Concerned that a call to 911 would lead to an ambulance ride and a huge bill, Alicia gathered her girls and hailed a cab.

Alicia asked me if I knew about how long these exams usually take. She was worried about the time because she had to be at work at 7:30, in just a little over four hours. She said that she worked for a small office cleaning company, explaining that her mother stays with the children during the day.

I asked Alicia why she didn’t go to a doctor when the coughing began. She said she had taken some cough medicine and assumed it would just go away in a few days. She didn’t have insurance, she told me, emphasizing that she couldn’t afford a visit to a doctor.

Alicia also said she didn’t get paid for absences from work and she was already behind on some bills. Not only that, but her supervisor gets very upset when he has to find coverage at the last minute. A co-worker got fired last year for being out of work for a week with the flu. Alicia explained that she had already missed two days of work in the past ten days because of her illness and was afraid she’d lose her job if she took any more days off.

A nurse stepped into the waiting room and called Alicia in. She hoisted Jayla onto her hip and asked Maya to grab the backpack and follow her. As Maya lifted it from the seat, the nurse walked toward her and, with a reassuring smile, said, “I can carry that for you.”

A few seconds later, the nurse, Alicia, Maya, and Jayla disappeared behind the double doors leading to the exam rooms.

I sat fixed in the waiting room chair, moved by how heartbreaking all this was… a young woman, sick for a month, feeling she has few options other than to live with an illness she can’t shake… having had to wake two young children from their sleep to go to a hospital in the middle of the night because she was overcome with a sense of panic and dread… fearful of losing her job because of a couple of absences due to being so sick.

The most extraordinary thing about Alicia’s predicament is how common it is. How did we get to a place where this is okay?

A couple of days later, I stopped by the emergency room. Dr. Rebecca Lacey, who had treated Alicia, was there. I told her that I had met Alicia and asked how she was doing. Without breaking confidentiality, she told me that an x-ray revealed pneumonia in one of her lungs, and that she prescribed antibiotics and bed rest for about five days. Dr. Lacey offered that Alicia seemed more upset about the order of bed rest than the pneumonia, so she made clear that going to work could not only make her condition worse, but that she could get others sick.

Dr. Lacey would have no way of knowing whether Alicia would comply, but judging from Alicia’s reaction, she guessed it was unlikely.

Think about how different Alicia’s situation might have been if she had insurance, had a better understanding of health and wellness, and worked for a company that provided sick days with pay. And how different it would be if Alicia felt that her health and well-being were genuinely valued by society, like those who can simply assume that the health care system works for them.

Ultimately, Alicia was a casualty of circumstances that make it almost impossible for her to take care of herself and her family as best as she would like. And consider the ripple effect: Because her illness got worse as time went on, Alicia would have to take off even more time from work, depriving her employer of her productivity and Alicia of necessary income.

It doesn’t end there. As a result of waiting so long to seek care, Alicia’s condition became more serious, and her children had a more extended exposure to a potentially contagious illness. The delay also caused the illness to become so acute that Alicia was forced to take them to a hospital emergency room in the middle of the night!

The children’s loss of sleep and the exposure to their mother’s illness is the tip of this sad story. These little girls were soaking in that moment, learning this is how the world works for them, that reaching into the health care system is a last resort and, once there, is a struggle to navigate.

Correcting for health disparities like this on a broad, national scale is a complex matter. Wouldn’t it be a great start if we, as a society, chose to recognize that no one should have to encounter the barriers to good quality care that Alicia faced.

Many of us can simply take for granted that our health care system is there for us. But for Alicia and countless others, that feels like an unattainable luxury. Health care could actually cost less if we could all agree that those barriers were unacceptable and worked to dismantle them. And in so doing, we would also relieve Alicia and so many in this country of the indignities that those obstacles create. Surely we can all agree that Maya and Jayla deserve no less.